While we offer many officially supported tuners, it’s also clear many users also have a bunch of other tuner devices that aren’t officially supported by Plex. Due to there being so many different tuner manufacturers, models, and device drivers out there, testing each and every one of them to certify compatibility simply isn’t practical, unfortunately. This is where community tuner testing comes in!

We’ve got such a knowledgeable and awesome user community that we feel the right thing to do here is to open up experimental, unsupported access to Plex DVR so that users can benefit from a wider selection of tuners. To do this, we are opening up use of unsupported tuners to include as part of a “Community Supported Tuners list”.

Please keep in mind that tuners added to the Community Supported Tuners list will have been tested and considered trusted by the community, but will not be officially supported by Plex. As the saying goes, “your mileage will vary”; use of unsupported tuners is at your own risk.

This list is can be edited by you if you find your tuner is working and not already listed: Community Supported Tuners List

If you have questions about a tuner another user mentions works for them. Please ask about it in the Community Supported Tuners forum section

If you have completed adding any drivers or other software your tuner may need, adding an unsupported tuner top your Plex Media Server will mostly follow the same set up procedures as a supported tuner.

Any unsupported tuners the server can find will show up in DVR setup with a yellow triangle warning of it’s unsupported status. 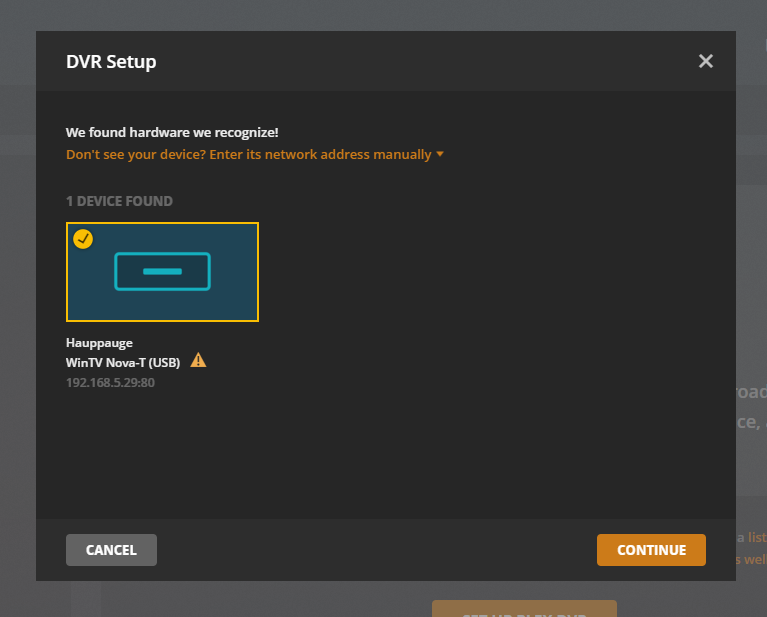 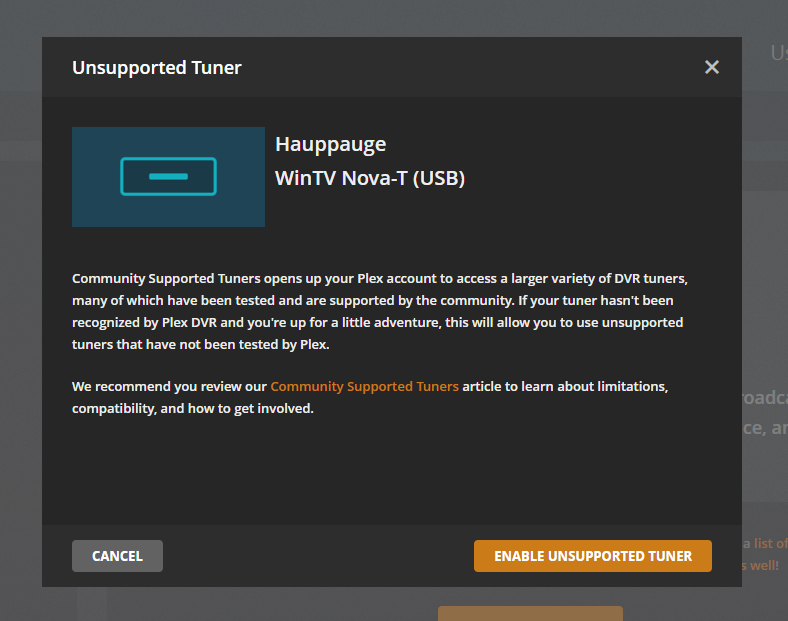 TV Tuners must be configured correctly and conform to one of the 2 standard API’s below:

These are the 2 most common frameworks on their respective platforms to utilize TV Tuners.

Unfortunately, there are some popular cards/devices which do not conform to this standard, and thus are incompatible with Plex:

But if you are the tinkerer type, there is another option:

Thanks to @dazzyp for testing and providing us with this information.

In case anyone is trying to setup up a tuner on a Windows Server 2008/2012/2016 box and having problems, did you know that these server OSs are missing the BDA plugin required for the tuners to be functional? I wasn’t aware of this and found my tuner failing to scan for channels (finished scanning after 10 seconds with zero success). I followed this guide here and I now have a working tuner (BlackGold BTG3620) in Plex! “How to add BDA support to Windows Server 2012“. During the setup, I chose a en-US option (corresponding to the region of the BDA plugin), even though my OS installation is in en-GB.