Though we will not remove it from the store, Plex VR is no longer in active development and there will be no updates for the time being.

Plex VR for Samsung Gear VR and Oculus Go lets you watch your Plex content in a virtual reality theater.

To make use of Plex VR for Gear VR, you will need:

After launching the Plex VR app, you will be prompted to sign in to your Plex account. Switching Plex Home users is not a feature at this time. This means that managed user accounts cannot sign into the app currently.

The Browsing screen is much like the standard layout of many Plex apps. It starts out on your Home Discovery screen with Continue Watching, On Deck, and Recently Added content from the selected server.

The server currently being browsed is at the top of the screen and the libraries you have access to from that server show up in a row across the top. Click the magnifying glass on top right to search the active server. Starting playback. Select an item with the laser pointer to bring up its box and read the info. Select the orange playback button to start playback. During playback of standard projection video, click the touch pad to bring up more information. 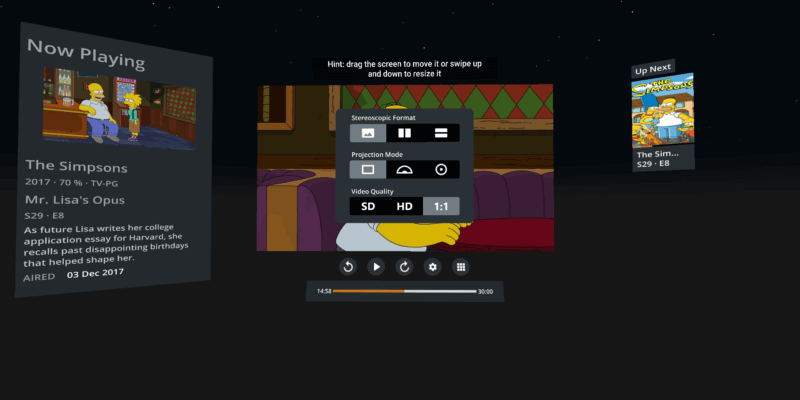 What is Watch Together and how does it work?

Watch Together is a multiplayer video watching experience for your videos, for you and up to three of your friends (4 people total). To start a Watch Together experience with friends, do the following:

See “Controls” above for Watch Together controls.

Watch Together is a Plex Pass feature but is available to try for a 7 days from the time you first sign into the app. Only one person in the theater needs a Plex Pass

Note: To set both 3D and projection modes in a filename put both at end of file name (e.g. Trippy Sphere - Proj-360 3D-SBS.mp4)

If enabled, the AAC 5.1 audio stream will be spatialized by the app to get an immersive sound field, even with your stereo headphones. If the audio stream of the content being played isn’t AAC 5.1, your Plex Media Server will transcode the surround audio to AAC 5.1 (Local video must already have AAC 5.1 audio, as there is not a server to transcode.)

Stereo Audio will sound like it is coming from in front of you.

Where can I play videos from?

Plex VR can play back:

Why are the Galaxy S6 variants not supported.

Performance on the Galaxy S6 variants was found to be too poor to provide a good experience, so it is not supported. The app will not show up in the Oculus store for unsupported devices.

How do I turn on/switch subtitles or audio streams?

During playback, tap the touchpad to bring up the Playback Info, then use the gear icon there to open the playback settings. There, you can select the audio or subtitle stream to use for playback.

Where are my Photo and Music libraries?

Photo and music libraries are not currently supported in Plex VR.

Storage permission is required to play back local videos off of your device.

Does the app work if the device is offline?

Yes, you’ll be able to watch videos stored on the device that way. Keep in mind that you’ll need an internet connection in order to sign in to your Plex account the first time you launch the app.

When is Plex coming to [other VR platform]?

We’re interested in supporting additional VR platforms, but we don’t have any specific information to share, sorry.

When are 3D and 360º videos coming to other player apps or the Plex Media Server?

No other Plex app  currently supports automatic switching based on file name on the various devices they may be played on. We hope to address this in the future but again sorry, no ETA.