Support Articles How to Use Secure Server Connections

How to Use Secure Server Connections

What’s the Deal With Secure Connections?

Why Is It Important?

When browsing the internet or making other connections these days, everyone wants to make sure that the communication taking place is secure and encrypted. Plex has teamed up with Let’s Encrypt to provide our users with high-quality secure certificates for your media servers, at no cost to you. There’s no need to set up VPNs and no need to create and install your own certs. You can safely and securely connect to your media no matter where you are.

After all, everyone loves to see beautiful secure locks, right?

Our blog post announcing the release of secure communications spoke about some of the details:

Let’s look at some of the complexities: For starters, secure communication requires something called a certificate, which securely identifies a website. Now anyone can make a (self-signed) certificate, but it can be tedious to install, and for a browser to trust it and give it that elusive green lock, it has to have been signed by a trusted authority. It’s a pretty laughable security experience if the browser warns you that your server isn’t trusted! We knew from the start that we needed real, official certificates, and there are a few problems with that. For starters, they’re expensive, especially when multiplied by a bazillion. And we knew we wanted to give a secure experience to everyone, not just our Plex Pass users. And that’s why we hooked up with the amazing team at DigiCert, and they were all “you want an ungodly amount of certs? We can do that!” So yeah, we’re buying you all DigiCert certificates for your media servers. Because we love you.

Secondly, as mentioned before, we’re on a lot of platforms, and there are lots of nuances to secure communication. For example, did you know that Internet Explorer requires Diffie-Hellman parameters to be larger than 512 bits? Did you know that certain models of LG TVs ship with a specific set of root certificates which is missing some common ones you might expect? Frankly, I hope you have no clue what I’m talking about here, because it gave us some major headaches along the way.

Next is the server itself, which doesn’t just have to support HTTPS, it has to do so avoiding many pitfalls, crocodiles, and whatever else was in that awesome game. Thankfully there are tools to help with that, and they even give you a grade. Let’s just say the Plex Media Server is an overachiever! Its parents are so proud.

Last of all, the media server can be accessed both remotely and on a LAN. At any given time, it may be accessible via multiple addresses. Certificates are generally associated with a small set of unchanging IP addresses. So we’ve worked some DNS magic to remove that limitation, and make things Just Work.

If you’re interested in some of the more technical details, Filippo Valsorda did an excellent writeup.

Related Page: Filippo Valsorda: How Plex is doing HTTPS for all its users

Are All the Communications Secured?

When you’re using a Plex app that supports secure connections (see below) to connect with a secure Plex Media Server, the requests to and communication with that Server are secure. If you stream media from the Server, that’s also secured. There are a few, very specific circumstances in which communication won’t be secure:

By default the Secure Connections  on your Plex Media Server is set to preferred. Meaning there isn’t even anything special you need to do unless you want it required at all times.

The following Plex apps will support secure connections to your Plex Media Server:

How Do I Know Connections Are Secure?

Basically, in a default Plex setup, if you don’t see any information indicating otherwise, then the connection to the server is secure. When a secure connection to a server is not available, the app will typically indicate either that the connection is insecure or that a connection cannot be made (because it would be insecure and that isn’t allowed in the app).

When a secure connection is not available, it’s typically clearly indicated, such as in the web app: 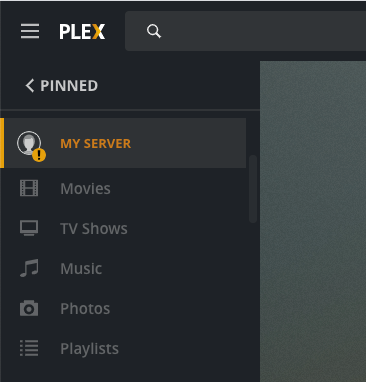 When you go visit our hosted web app at app.plex.tv in a browser, the app will automatically load securely.

So, if you have all secure servers, you’ll always be connected securely!

Tip!: You can always manually go to https://app.plex.tv/desktop to force using a secure connection to Plex Web App. Of course, if your servers don’t support secure connections, then they won’t be accessible.

By default, the local, bundled version of Plex Web App will load over HTTP. While the app itself may have loaded insecurely, it can still make secure connections to individual servers that support secure connections. That said, we still generally recommend using our hosted web app (app.plex.tv), even on your local network, since it can still stream locally and it ensures you’re running the newest web app version.

You can, of course, attempt to force an HTTPS connection simply by using https:// in the URL. If you do so, since the server’s certificate isn’t for “localhost” (for example), your browser will almost certainly warn you that there isn’t a valid certificate for that connection. 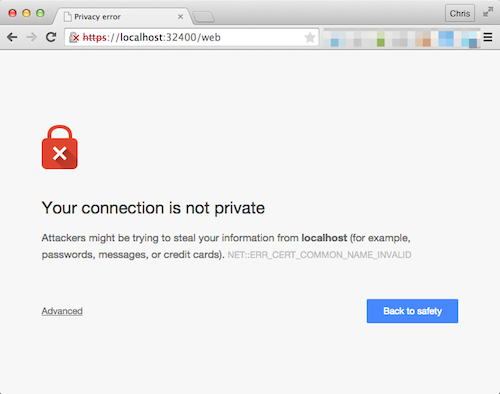 What About Via IP or My Own Domain?

Some users may be used to accessing their server’s bundled Plex Web App through something like http://public.wan.ip.address:32400/web or http://mycustomredirecteddomain.com:32400/web when away from home. If you just switch to using https:// in the URL, you’re going to see the same sort of behavior as described above for ‘Using the Bundled Plex Web App”. The certificate that’s been issued to your server isn’t signed for your IP address or your custom domain, so it won’t report itself as valid for those.

Instead, simply launch the hosted web app app (app.plex.tv) as described earlier so that you can take advantage of the secure connections as intended.

Why Isn’t It Working?

In rare cases, your apps still may not be able to connect securely with your Plex Media Server. In nearly all cases, this will be caused by issues with your router/modem or network. It also isn’t currently possible to connect with a “mobile server” from one of your mobile apps securely.

If you enable the “mobile server” in an Android or iOS mobile app, it isn’t currently possible to connect with those securely. This means that connections to those mobile servers will be insecure.

If you wish to allow mobile servers to be included in the list for the Plex Web App, you can use the local/bundled web app that comes with a Plex Media Server, as noted earlier.

Some routers or modems have a feature known as “DNS rebinding protection”, some implementations of which can prevent an app from being able to connect to a Plex Media Server securely on the local network. For most users, this won’t be an issue, but some users of higher-end routers (or those provided by some ISPs) may run into problems.

Similarly, some DNS providers (including some ISPs) may have this feature.

DNS rebinding protection is meant as a security feature, to protect insecurely-designed devices on the local network against attacks. It provides no benefit for devices that are designed and configured correctly.

In some cases, your ISP itself may provide rebinding protection when using their DNS services. In this case, you can switch to using a different DNS service. Depending on your personal setup, you may need to update either your router’s configuration, the configuration on your computer(s), or both.

There are many free and easy-to-use alternative DNS services. Some of the more popular:

We can’t provide instructions for all possible configurations, but the most common scenarios for this issue include using “dnsmasq” (often on DD-WRT based routers), and using pfSense. You may need to consult your router’s documentation for more details about DNS rebinding protection.

To allow secure connections to work correctly on the local network if you are using “dnsmasq” with DNS rebinding protection enabled, you will need to add the following line to your configuration file (the “advanced settings” box in DD-WRT):

Similarly, if you are using pfSense’s internal DNS resolver service, you’ll want to adjust that configuration. In the pfSense web UI, go to Services > DNS Resolver, click Display Custom Options, and enter the following the the text box:

In some cases, it may be possible to work around DNS rebinding protection by enabling Remote Access for your server. When enabled, this allows connections to be made via your public/WAN address. In most cases, your router will automatically keep such connections within your LAN, though this isn’t universal across all routers.

Warning: When working around DNS rebinding protection this way, your apps and Plex Media Server will typically treat the connections as being from a “Remote” source. This can affect which streaming qualities are used, as well as trigger Remote-applicable server bandwidth and transcoding limitations.