Tip!: You must have your compatible tuner & antenna connected to your Plex Media Server to be able to tune over-the-air broadcasts. The ability to record broadcasts (e.g. DVR) is a premium feature and requires an active Plex Pass subscription.

It’s easy to set something to record. When browsing the Program Guide, all you need to do is open the item (a movie, show, episode, sporting event, etc.), click the Record button, then adjust any necessary settings before confirming the recording. Setting up recordings is supported in the following Plex apps:

Note: Ensure the computer / NAS the Plex Media Server runs on does not sleep / hibernate or turn off the disks or go into power save for the network interfaces. Plex Media Server will not bring the system out of sleep to start a scheduled recording.

Once you’ve found a movie you’re interested in recording, open the preplay/details screen for the movie. 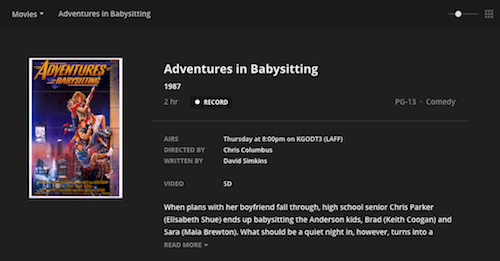 You can then use the Record button. 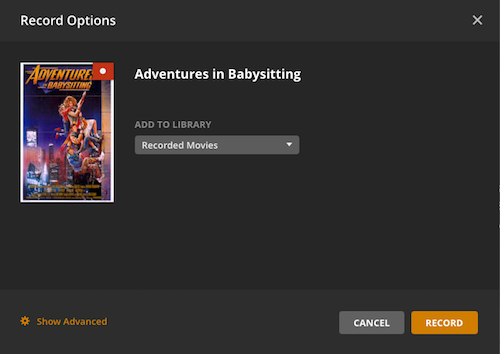 You can choose to which movie library you wish to add the recording.

Television shows, news programs, and sporting events are all treated as episodic content. If you open the main series, you can see details for it along with all episodes/events that are part of it. 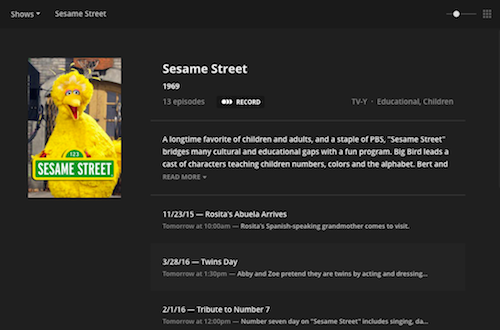 Choosing to record a show lets you control which episodes of that show will be recorded. 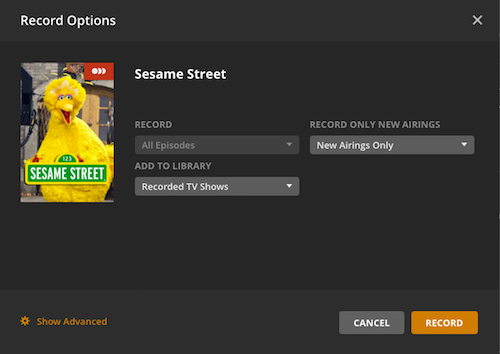 You can choose whether to record “New and Repeat Airings” or “New Airings Only”. You can also choose to which television library you wish to add the recording.

You can also view a specific episode or event. 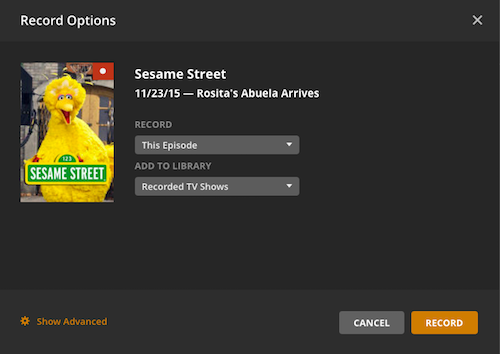 You can select whether you want to record only that specific episode or all episodes. Similarly, you can choose to which television library to add the recording(s).

If you choose All Episodes, you can further specify whether to record “New and Repeat Airings” or “New Airings Only”. 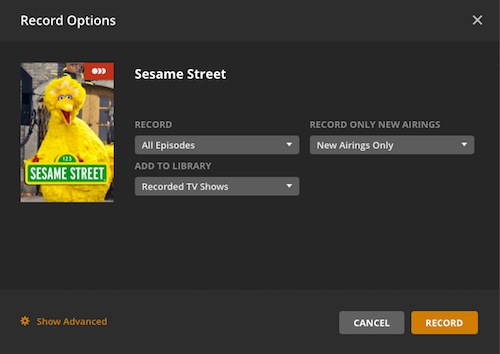 You’re likely to eventually run into a situation where you don’t have enough tuners to record a new item you set up. When you try to set up a recording that conflicts with existing recordings, you’ll see a Conflict Detected window.

The window will show you what other items the new recording would conflict with. You then have choices:

When you have a Recording window open, you can click Show Advanced at the bottom to set more advanced options. Most users won’t need to do anything with these very often. 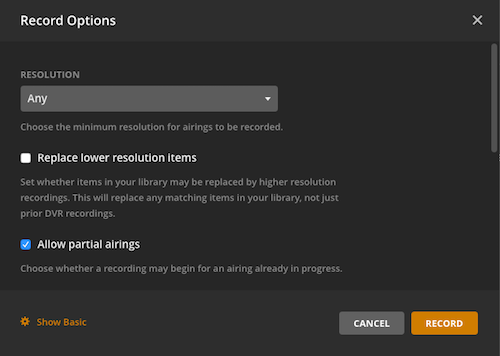 Tip!: The advanced options available here can vary depending on what type of content recording you’re setting up.

Select the minimum resolution to use for recorded airings. Available options:

For instance, if you select HD only, then an episode that airs in SD will not be recorded, even if it is for the selected show.

If enabled, then items in your library can be replaced if the new recording is a higher resolution.

Note: This can replace any matching items in your library, not just prior DVR recordings.

Choose whether a recording may begin for an airing that is already in progress.

Start the recording early. Specify the number of minutes before the scheduled airing time to start recording.

Choose whether you wish to restrict recordings for this program to a specific channel. Available options:

Set the maximum number of unwatched episodes to keep for the show. Available options:

If you choose “3 episodes” and you currently have 3 unwatched episodes, then when a new episode gets recorded, the oldest existing episode will automatically be removed.

“Episodes from the past X days” refers to when an episode first aired. So, if you record the nightly news and choose “Episodes from the past 7 days”, then after the 7th day, older unwatched episodes would start being removed. Conversely, if you have that setting chosen and you record a repeat airing of an episode that initially premiered a year ago, the episode would not be retained at all (since it was first aired more than 7 days ago).

Tip!: You should really only use the “Episodes from the past X days” options for shows where you’re only interested in retaining _current_ episodes.

Choose how quickly episodes are removed after the server admin has watched them. Available options:

For any setting except Never, episodes will automatically be deleted X number of days after the server admin account has watched them.

Once you’ve set up some recordings, you can manage them. That allows you to edit settings, adjust priority, or resolve recording conflicts.