Tip!: The ability to specify different editions for a movie requires a Plex Pass subscription for Server admin account.

Currently, Plex’s multi-version support has allowed users to provide multiple different versions of the same underlying movie/episode and have them merged together. This is for cases where you have versions that are different resolutions (e.g. 1080p and 4K) or encodings (e.g. H.264 vs HEVC). The feature is also used as part of the server’s Media Optimizer feature.

That feature allows player apps to either automatically choose the appropriate version to play or else offer the user a choice, since the versions should all represent the same underlying movie or episode. It’s the same actual content, just a different resolution/encoding/etc.

Sometimes, however, you might have a movie that has multiple different “cuts”: Theatrical release, Director’s Cut, Extended Edition, Unrated, etc. Blade Runner is famous for having multiple different cuts released for users to watch. The original Star Wars trilogy is similarly famous for having both the original (theatrical) versions and then the later “Special Editions” (not to mention other fan-produced cuts). This is where Plex’s support for “Editions” comes into play.

When you have a non-standard edition of a movie, you can specify which particular edition it is. In cases where you have multiple editions of the same movie, they can all be added to your library, where their watched status, user ratings, etc. are all tracked separately.

Currently, all editions of a movie you’ve added to your server will be displayed in the library grid when viewing the library. As such, most users will prefer to edit each library item to choose or provide an appropriate poster, to help differentiate them. 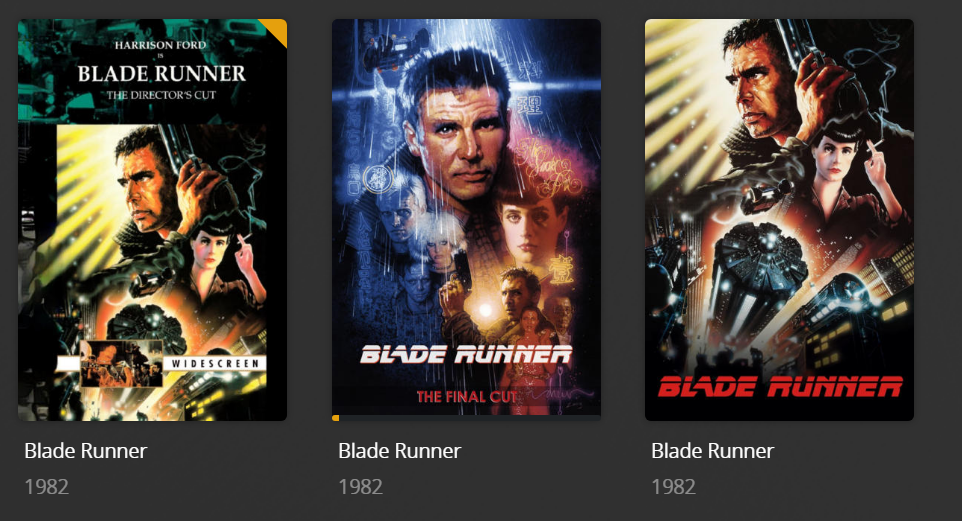 When viewing the details page for a movie edition, a tag will be displayed with that edition name.

You can specify or add edition information in a couple of different ways.

Anyone running a Plex Media Server can specify an edition for a movie simply by naming the video file correctly, when adding it to the library. Specifically, some special text needs to be added to the end of the filename. For example:

Refer to our dedicated naming and organizing article for specific details on how to name the files and/or folders to specify different editions. If you have local trailers or extras for any of your “multiple edition” movies, you should also review our information about those local trailers and extras.

Note: If you rename the file for an existing library item, it will be treated as a new library item after the next scan.  Any watched status or customization of the metadata you had previously done for this movie will not carry over to this new “Edition”. To maintain the existing title information, we recommend you instead use the “Edit” method outlined below.

For those who don’t want to mess with file naming, you can also specify edition information for existing library items when editing details for the movie.

Support for editing the edition information is available in the Plex Web app, version 4.87.1 or newer. 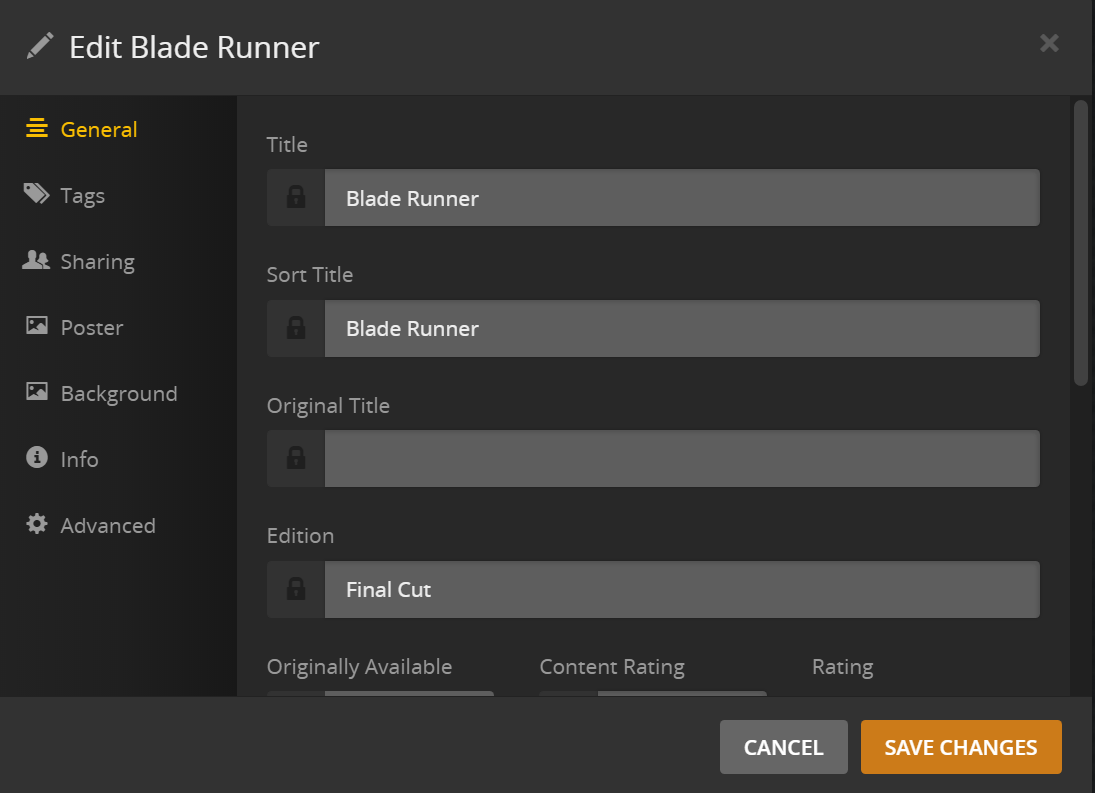 If you add or edit the Edition tag from this Edit page, the existing library item will be converted to the specified Edition. Any watched status or customization of the metadata you had previously made for this movie will carry over to this new “Edition”.

What’s the difference between “Editions” and “Versions”?

Versions all represent the same release of an item. So, you can have multiple versions (1080p vs 480p, HEVC vs H.264, MP4 vs MKV) of The Empire Strikes Back, but they’re all for the same theatrical release of the movie.

Editions represent different releases of an item. So, the “theatrical release” vs the “Special Edition” of The Empire Strikes Back. Or “Theatrical” vs “Director’s Cut” vs “Final Cut” of Blade Runner. Editions would also be appropriate for a 2D vs 3D version of a movie.

Can I use Editions and Versions at the same time?

In the above example, there are two different editions of Blade Runner, the original release and then a “Director’s Cut” edition. The “Director’s Cut” has four different versions available: H.264 and HEVC encodings at both 1080p and 4K resolutions.

Can I use local trailers or extras with Editions?

If you’ve enabled syncing of watch state and ratings, that does not currently work with “editions” of movies. Any regular, non-edition movie in your library can sync its watch state or rating, but if you’ve added “edition” information to the item, that item will not be included in syncing. (Doing so would indicate that the activity definitely came from a personal Plex Media Server, since “editions” aren’t available elsewhere.)

What happens if I my Plex Pass subscription expires?

Nothing will happen to your library.  However, you will not be able to add edition information to new content or change the information on any existing Editions.