Tip!: You must have your compatible tuner & antenna connected to your Plex Media Server to be able to tune over-the-air broadcasts. The ability to record broadcasts (e.g. DVR) is a premium feature and requires an active Plex Pass subscription.

By default, the server will only try and detect where commercials occur and then player apps will offer a Skip Ads button, when watching recorded content, allowing you to skip over the detected commercials, if desired. This helps protect you against cases where the detection might not be perfect (so the server doesn’t incorrectly remove/destroy part of the actual programming) and allows you to watch commercials, if you wish.

It’s important to keep a few things in mind:

You must then decide which type of functionality you’d like to use: “destructive” commercial removal or “non-destructive” detection and skipping of commercials.

Modern versions of Plex Media Server support detecting where commercials occur, marking those places, and then allowing users to choose whether or not to skip commercials during playback in a supported app. This has several benefits:

Plex Media Server v1.20.0 or newer is required to detect commercials and mark them as available for skipping.

The ability to skip detected commercials in recorded content is supported in the following player apps:

We’ll continue working to bring support to additional platforms in the future.

Note: When playing recorded content, the ability to skip through commercials requires an active Plex Pass subscription for the Plex account used in the player app.

While we recommend using the non-destructive detection of (and option to skip) commercials, it’s also possible to have Plex Media Server alter the recorded video file to simply remove the detected commercials altogether. Because the detection of where commercials occur is not always perfect, we generally do not recommend choosing this method.

Commercial removal in this case is a “destructive” process. That is to say, whatever is detected as a commercial will be removed forever from the recording and if an incorrect detection is made, it is not possible to restore the deleted sections.

Detect Commercials for All Recordings

Automatic detection of commercials can be enabled for all your recordings in the DVR settings under under Settings > Server > Live TV & DVR in Plex Web App. From there, click on DVR Settings, then scroll down to Remove Commercials. This is a global setting and will attempt to detect and remove commercials from all of your current scheduled recordings. 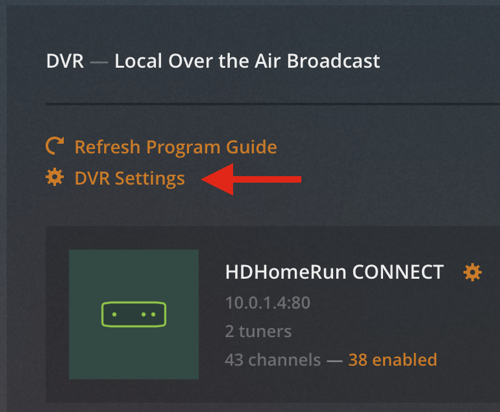 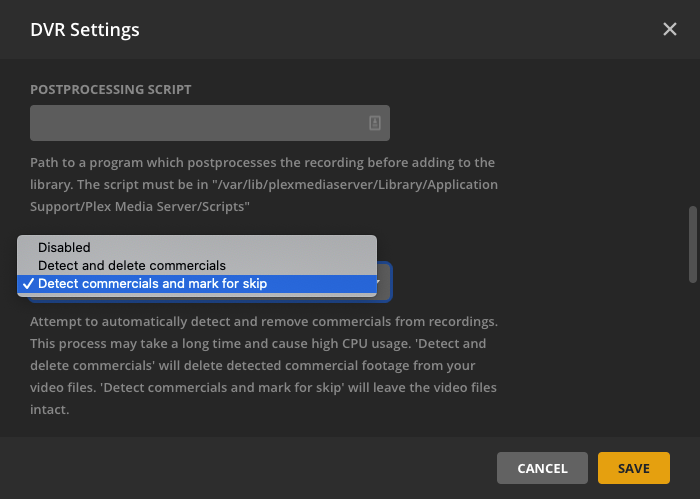 Tip!: There is the possibility that the last few seconds of a recording can inadvertently be cut off. This can be mitigated by padding an extra minute or two to the end of the recording. To do so, click on Recording Schedule in the Plex Web App. Then click on the scheduled recording you would like to edit from the Recording Priority list on the right. Lastly, click Show Advanced and scroll down to minutes after end.

Automatic removal of commercials can also be enabled for selected recordings of your choosing. To enable this feature for a single recording, Click on Recording Schedule in the Plex Web App.

Lastly, click Show Advanced and scroll down to Remove commercials. 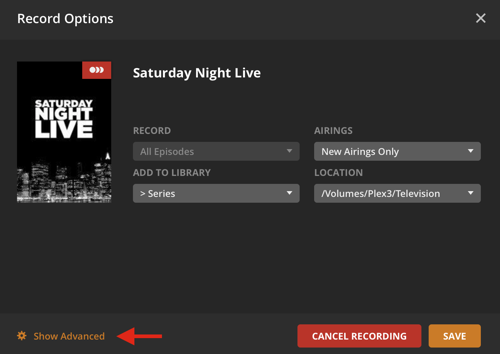 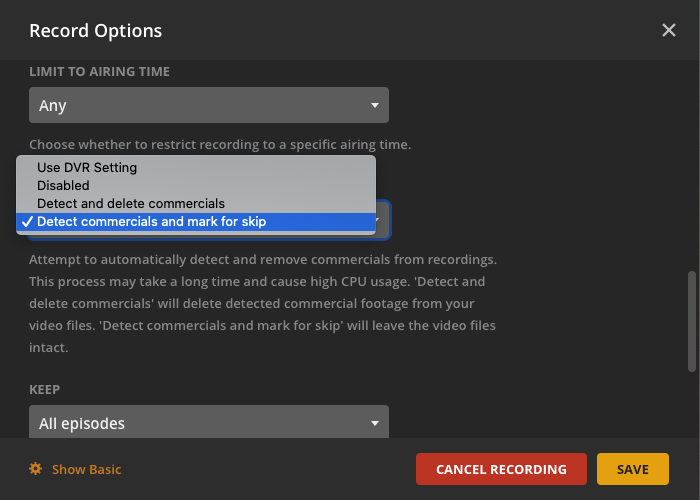 Customizing How Commercials are Located and Removed

For advanced and adventurous users, it’s possible to adjust the way Plex locates and removes commercials. This is done by providing your own, custom comskip.ini configuration file. To do so:

If you would like to grab a copy of the default comskip.ini file to use as a starting point, you can find it in your Plex Media Server install directory:

Note: Do not modify this default file itself. Instead, make a copy of it, modify that copy, and place it in the location mentioned earlier.